I LOLed multiple times and had my mouth agog for most of it. Absolute comedy gold. You really couldn’t make that shit up.

“It makes such a difference”

Thank you Holy Moly, I was supposed to be working until your email arrived. Damn you.

I guess some people won’t. I know it’s kinda unusable, but that’s the point. I found myself playing through it 5 times to try and see what’s going on. Then I started trying to pause bits and rewind it. Then I figured I needed to go to their Flickr stream to see what their work looked like.

I was tricked into interacting and looking at their work. But I don’t mind. It was a good trick.

I spent my Sunday afternoon making this. Sophie said “why?”.

I was really just using it as an excuse to learn a bit about how iMovie 09 works. And as soon as I stumbled across the beat matching feature I knew I had to do this.

Kind of like Walk This Way by Run DMC and Aerosmith. But the version that would have occurred if Satan was in charge.

And just in case that leaves you in any doubt of Scooter’s genius. Check this.

Kind of like a jumpstyle version of Where The Hell Is Matt.

But did you see the size of those crowds? Yoiks.

How are you going to show off the big bright screen of your new mobile phone? Use it as the centerpiece in loads of scenes with super-cute animals.

How can it not fail?

They’d be better not having a mega-sucky website that has absolutely no reference to or regard for the thing you’ve just been sucked into using aaaah-trickery: http://ultratouch.samsungmobile.com/

And I don’t like the inbetweeny bits much either. But I do respect their total lack of shame in playing the cute card so blatanly though.

I’ve just been on a very strange voyage. A voyage into Donk.

I’m going to rewind and retrace my steps so that you can join me. Come with me. Come to the Donkside. Take a trip to the heart of Donkness…

Here’s where the rabbit hole opened up. A simple P.S. at the bottom of an email from Little Boots…

I click the link. It takes me here. To this video.

I was convinced that it was a spoof. As if there’d be a genre called Donk. Everything is wrong about the video. The knowing subtitles over subtle Northern Accents. The presenter’s slight grin when he’s chatting to folk. The funnily named shops. Everything. There’s no way I’m falling for a prank like that. It reminds me heavily of the episode of Brass Eye where they whang on about Cake (the made up drug). And all the characters and the interviews look like they could be setups or clever edits.

So the I popped out and went round to Curtis’ house and showed it to him. And he (and his son Max) both went “oh yeah, Put a Donk on it”. So much for the fake thing then. And once again I’m behind the curve.

Here are the real Blackout Crew with their real hit Put A Donk On It. With a real 4 million views on YouTube. Holy crap!

Oh yeah, the YouTube page features a link to go and buy the real MP3 from the real iTunes store. Put a Donk on that. Seriously.

So at this point it becomes clear that Donk is no joke. And the donkumentary (sorry) is also no joke. So I watch part 2, and part 3 and part 4 and part 5. Back to back. Mouth agape. Unable to pick my jaw up off the trackpad. It’s fucking incredible. So many amazing moments. So many brilliant lines. So many stunning characters. The films do have a touch of that Vice maggy sneeriness (to be honest, you’d really struggle not to given some of the situations). Having said that it’s a bloody amazing bit of documentary footage and well worth the 20 minutes or so it’d take to watch the whole lot.

It’s an amazing tour of an incredible, almost unbelievable scene that’s rooted in a chunk of the North of England. Although there’s undoubtedly Donk mutations elsewhere. To be honest it’s pretty close to a lot of the hard-dance scene in a lot of ways – fashion, sound, people, drugs. Trakky-wearing gurners with glo-sticks have always existed at ‘that’ end of dance music. But you can’t ignore Donk – it’s just got such an awesome name.

There’s a full article about it in Vice Land. Which, if you can’t be bothered to watch the videos (shame on you) is a decent summary of what goes on in the video series. But nothing can quite deliver the faces of Donk quite like seeing them moving and gurning – with blue WKD stained tongues :-p

What smacked me between the eyes is really how naive I am to things that go on outside London and Brighton. Sure I’ve been to ‘hard dance’ things and danced amongst the day-glo-mong-puppets in my time. And tried in vain to keep up with music that’s twice as fast as my heart. But it’s always been a passing toe-in-the-water at a festival or something like that. I’ve never been and lived the Donk.

I sit in endless meetings where people pretend to understand ‘the young people’. But they only really view it through a really tiny window. A window where the view extends just outside the central line. So the best you’ll get is someone who’s really bloody ‘on it’ because they went to a Dubstep night, once, for 10 minutes, until they felt a bit sick. Or someone will drop Dizzee Rascal, yet again, into a presentation, because it’s a shorthand for urban and street (but not too urban and street).

One day I want to see Donk in a segmentation. Please let it happen. Please. Fuck it. I might even take my next Keynote presentation and ‘Put Some Donk on it’.

Here’s what happens when you Put Some Donk on the Ting Tings.

And don’t worry all you London-based marketing agencies – Dizzee’s been Donked too. Imagine that – it’s a north-south Donk mash-up. Stick that in your presso and feel the client Kudos.

This is where my Donk journey ended for today. If you want to carry on there’s plenty of Donk out there, just get searching.

So after all that it’d be easy, and kinda logical, to do what Vice did and conclude:

After a week in the northwest immersed in donk culture, it was impossible to deny that it’s the bottom-feeder of the already bottomed-out dance-music food chain. It’s parochial, drug-centred, racist, sexist and violent, and that’s what makes it so, well, special. For all its flaws, donk perfectly mirrors the generation of kids and the society that created it: totally and hopelessly fucked, in every sense of the word.

But there’s something else in there too. Sure it’s built around escapism and getting fucked out of your mind on pills and cheap booze. And it’s pretty much the soundtrack to getting the living pulp kicked out of you. But at least they’re making something that’s theirs. Doing something together. Sharing in a scene that they own. Something they love.

Oh crap. I can feel it coming on. A silent-flash-Donk-rave at Doncaster Station. Life is for sharing after all.

I’ve had a nice Christmas, hope you have too.

This clip made me feel ready for NYE:

There was the mighty Weekender! An awesome extended rave chronicle / pop promo from back in 1992. I always thought Flowered Up were a little bit pony, but this makes up for every slightly lame track they ever put out.

I’m sure I’ve got this on VHS tape somewhere. Absolutely classic. Feels a wee bit cringeworthy and a tiny bit naive in spots, but overall pretty surprising how well it’s aged, considering.

Split into 2 parts because, at over 13 minutes, it’s too long for YouTube. 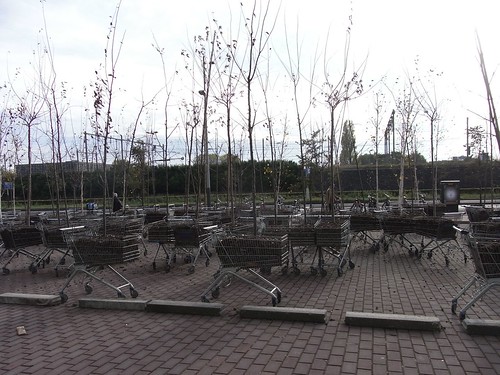 I was in Amsterdam at the weekend and was lucky enough to pass through a bunch of things that were going on as part of the Urban Play festival.

I particularly liked the mobile forest. 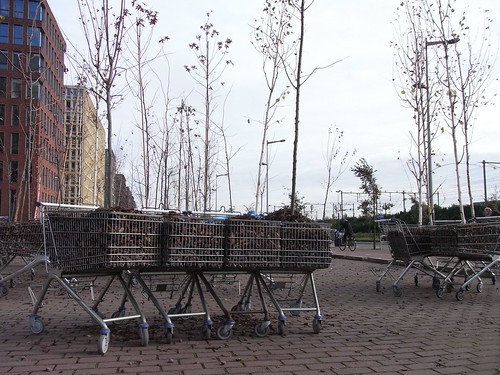 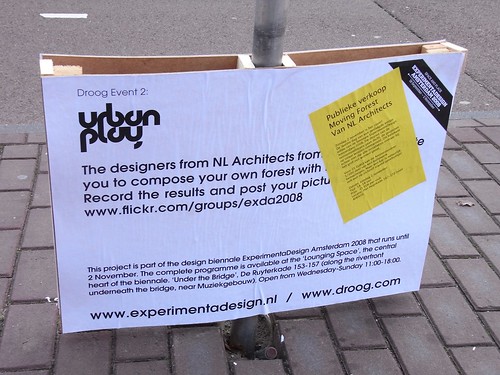 I’m not sure it was supposed to be this mobile… 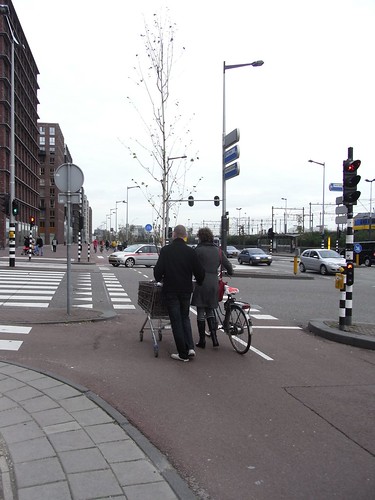 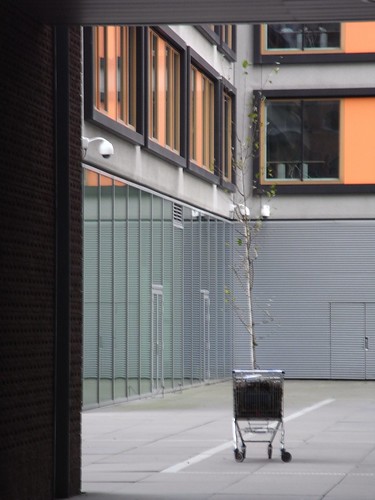 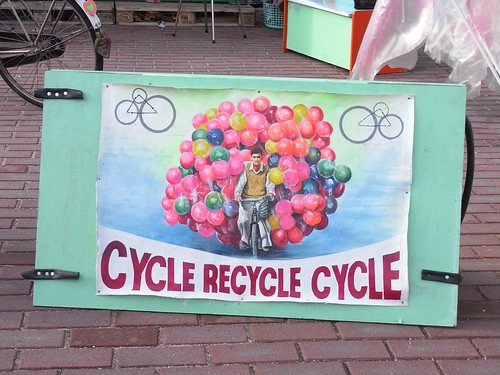 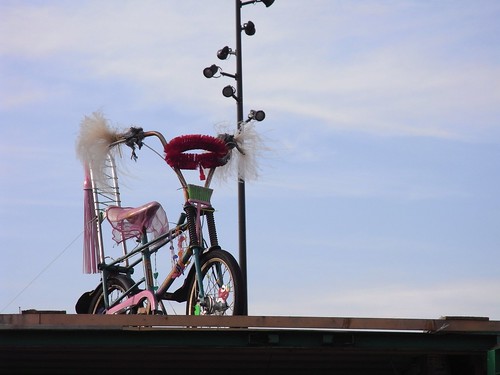 And then there’s the sad story of Sagmeister’s coins… 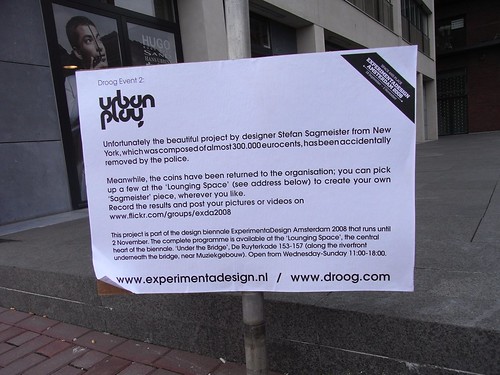 Well that’s not strictly true. But I was looking at my stats when I noticed some unfamiliar activity…

That’s not strictly true either. But I did get some traffic from this lovely blog http://whythatsdelightful.wordpress.com/ which is written by Graham Linehan which was a name that I recognised. And it of course because he’s the writer of Father Ted and the IT Crowd amongst other things.

It’s an inbound link that made me feel cool. Maybe that’s a bit sad. But it’s true.

Graham’s blog is nice and has lots of funny stuff in it (as you might expect). It’s where I found this…