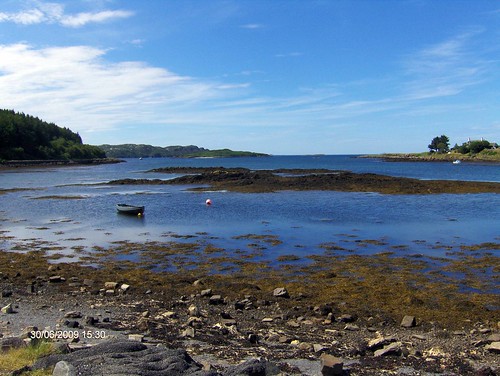 There’s this guy called Tim Wright. He’s a lovely chap. He did some planning and writing and things for a game we made a long time ago at Poke. Anyway he’s either become a nutjob or a genius (or maybe he was always both). I’m not sure if I’m qualified to say which right now.

From 30th June to 25th August, I’m following a route across Scotland from the south western tip of Mull to the outskirts of Edinburgh, as charted in Chapters 14–27 of Robert Louis Stevenson’s ‘Kidnapped’.

That’s quite a bit of walking he’s doing. And he’s documenting the whole thing on a blog: http://www.timwright.typepad.com/kidmapper. And he’s podcasting and Tweeting and all that jazz too.

And he’s sticking up his photos on Flickr where they get combined with a passage from the book that’s relevant, like: “There was in this part of the isle a little hut of a house like a pig’s hut, where fishers used to sleep when they came there upon their business”: 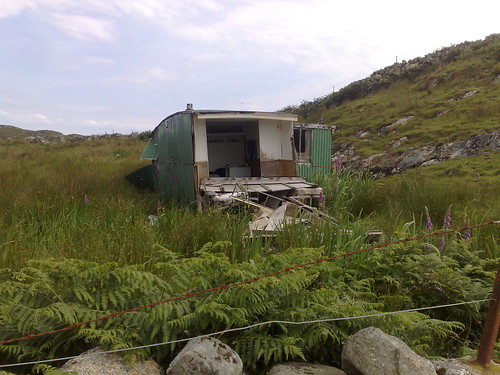 And he’s reading out passages from the book in relevant locations and putting the videos online:

And bravely he’s offering up:

And like he says, he can be found on most social services under the name ‘kidmapper’.

Now the big problem I have with this kind of thing is that it makes our job as internet slags really hard.

How on earth are we supposed to do things for paying clients that compete with this? He’s not thinking about dayrates. Or production costs. Or about delivering a specific message to a given set of look and feel guidelines. He’s just out there doing something because he really wants to. Because he’s got this mission that he wants to do. Just because.

And it’s charming. And interesting. And funny. And real. And a touch shambolic. And a little bit odd. And I want to follow him. Because I don’t know what’s coming next. And I know that he doesn’t either. Oh in that incredibly honest way he’s starting very much from zero – he currently has only 19 followers on Twitter.

By the way, he doesn’t even have an Amazon merchant link from the book on his site. THAT’S HOW PURE HE IS!