I hope that this gets people wearing more latex gloves. They’re practical, and stylish…

Jason at work just sent me this:

By Publicis for Orange Slovakia as far as I can make out. Via Space Invaders.

I understand the colour bit. And glad to see they still spell it properly (with a u) in Polish. But other than that I can’t see why Sony would send me this unless it’s some kind of strange ARG…

As of today, you can play full-length tracks and entire albums for free on the Last.fm website.

Something we’ve wanted for years—for people who visit Last.fm to be able to play any track for free—is now possible. With the support of the folks behind EMI, Sony BMG, Universal and Warner—and the artists they work with—plus thousands of independent artists and labels, we’ve made the biggest legal collection of music available to play online for free, the way we believe it should be.

Interestingly you can play each track 3 times, then you get an alert about their forthcoming ‘subscription service’. But I think that sounds pretty fair. If I want to listen to something on-demand, more than 3 times, I think it’s about time I started to make some commitment to it.

The more you play stuff the more the artist gets paid. That sounds pretty fair to me too.

Nice one chaps. Good luck with it.

There’s been mutterings of recyou.jp around for a few days.

It’s a very slick Japanese flash site for Sony Walkman. It’s quite hard to navigate your way through it, I managed by trial and error rather than a knowledge of Japanese. Basically you can upload a photo and it animates you in time with music. Your animated head can then be used / displayed in various ways.

It was made from this photo (just this one photo, no other information at all – that’s the amazing bit):

Pretty damn impressive technology and the site’s got some very slick presentation. I can’t really comment on whether I think it works from a communications perspective because of the language and culture gap. Here’s a video showing what they’re doing in terms of guerrilla projections.

That music really does my head in though…

My suspicion is that it’ll win a few awards for it’s craft and technical wowness.

I can’t help myself.

I got contacted by their PR guys with this:

Set to follow in the footsteps of its predecessors (“balls” and “paint”) the new ad is a closely guarded secret, but I can tell you that it is currently being shot in New York; ‘Gorgeous’ director, Frank Budgen, will be directing; and this time the theme is ‘play-doh’.

Ruth Speakman from Sony will be ‘Twittering’ throughout the filming of the advert, providing early glimpses as the shoot unfolds. Ruth’s experiences live on set can be found at: http://twitter.com/braviaplaydoh.

It’s definitely shaping up to be another ‘hero’ ad. All eyes on the ad. The advert being the thing that we’re all waiting for. And suckers like me are doing the bidding of Lord Advert. They’ve even got people ‘twittering’ (their inverted commas not mine) about the making of the ad. I wonder if there’s a Facebook group called ‘waiting for the new Bravia advert’?

But the thing is, there’s only a few adverts out there that can actually sustain or command this kind of attention. And to be honest if this one’s more ‘paint’ than ‘balls’ I think it could be their last opportunity to ride on the goodwill created by beautiful bouncing balls.

It’s not an uncommon thing for many of us to get a brief that’s basically “make this ad famous”. Sometimes it works; if the ad deserves to be famous. Oftentimes it fails; because it doesn’t. It’s not that tricky a formula to work out. It is tricky to tell someone (or admit to yourself) that yours is one of the latter.

An ad that tried to hero-ise itself without the balls to back it up (‘scuse the pun) is the recent Ford one with the balloons in it. This one if you’ve not seen it:

The first time I saw it was in the Metro, they’d run a piece on how it was going to be shown during some football match, and it had cost loads of money, and it had lots of landmarks in it. OK, so what, now you’re going to have to prove something to me.

The second time I saw it was in Victoria station. Where they’d parked a Ford Mondeo in the station with loads of plasma screens, a sound system, etc. And you know what you could do? You could sit in the car AND WATCH THE ADVERT! I thought this was pretty lame and a bit navel-gazingly-rubbish. That was until I visited Amsterdam a few weeks ago and it was eclipsed by this (at the airport):

As you’re going along the travelator, the ADVERT FOLLOWS YOU!

What a waste of a massive long screen that cost loads of money. You could do something great with that. Seriously.

It’s not that I don’t like the Ford advert, it’s fine. But in my humble opinion it’s wasn’t ready to be hero-ised.

Sony are developing a range of concept products that don’t require chargers or batteries. They all use mechanical energy.

My favourite is this mechnical camera with no display called ‘Spin ‘n’ Snap’. Photos from here. 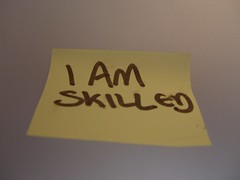 Nik’s set up a group called ‘Boast it Notes‘ on Flickr. It’s simple really. I don’t think I should even stoop to the level of explaining it. It came about after he set up a group on Flickr called ‘Street Style’ now it’s got 63 members and photos in it. It was a hole waiting to be filled. Maybe ‘boast it notes’ will be the same. Probably not.

But the whole notion using photos as notes is an interesting one. i found myself doing something rather odd on Saturday. I was going to someone’s house, and I had their address on my computer. But instead of sending it to my phone using some nonsense technology. Or writing it down, as a non-geek with a pen might do. I photographed it on my phone. 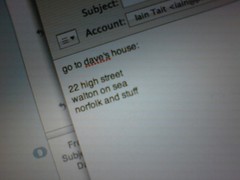 This might seem odd. But it was quick. Free. And less likely to be lost than a scrap of paper. Or maybe I’m just in love with my new Sony Ericsson K800i.

Who cares about Apple, Creative Labs, Sony and all those guys. Surely the best MP3 players simply have to be made by Pez. It’s got a tiny memory, looks really flmsy, the battery life is bound to be shocking. But there’s something strangely desirable about this PEZ MP3 Player.

The site I found it on CoolestShop.com has some other really nice stuff in stock too: nice teeshirts, rude trainers, and more.