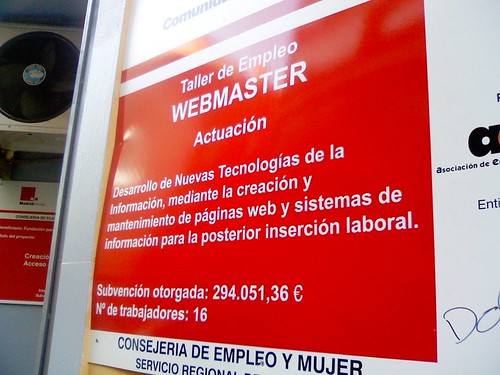 I’ve no idea what the note above says. But I reckon it’s time we started thinking about Webmasters again.

I always wanted to be a Webmaster. It sounds so super powerful and cool. If a little geeky.

Anyway the more I think about what we do these days and the importance of social media (it’s amazing how much my fingers balk at having to type those two words side-by-side) the more I think that every site needs a webmaster. What I like about the term webmaster is that it implies that one person is the big boss. The master of the site. The person who speaks with the voice of the machine.

When you come across a brilliant site it so often feels like it comes through one person. Or at least there’s a very strong sense of singularity in the way it’s written and presented.

Webmasters would also, I’m sure, be good at Twitter, Facebook and all that stuff. They’re kind of like the Maitre D’ of the site. They’d know the regulars and keep them happy as well as getting new people involved. Looking after blogrolls as well as getting subscribers to an RSS feed.

Webmasters used to be the guys who knew a little about a lot. Not the deep techies but the person who could do updates and bits and pieces of code. The kinds of skills that would make your really good at customising widgets and blog bits.

Anyway next time you’re putting together a site don’t forget to think about who the webmaster is going to be :-)

Yes it’s all about a word gag. But it works. It’s embedded itself in my head. Ask me to think of a comparison website right now and I know what I’ll think of first. Well not actually right now, because I’m writing about it so I’d obviously think about it first, but generally I think it’s done a good job of using a weird device to get me to think about meerkats when I think about comparing. So psychologically they’ve done a smart thing – I think.

The numbers raise a load of questions…

But here’s where it gets a bit fishy…

Aleksandr Orlov (the Meerkat) started following me on Twitter a while ago. And if you go and look at his Twitter page he’s following a huge number of very well-followed people… Dave Winer, Biz Stone, Om Malik, Tom Coates, Evan Williams, Jason Calacanis, etc. etc. etc. And he’s following 2,000 people with 1,800 followers which just isn’t natural, is it?

I’m not sure what the ethics of this kind of thing are. Or why it bothers me so much. All I know is that it makes me feel a bit yucky. And stops me from liking Meerkats.

Whoever is playing the part of Aleksandr is working it pretty hard. And doing lots of @replies. Which isn’t a bad thing when you’ve got a character that people like. It’s just the follower-spamming I find a bit scary.