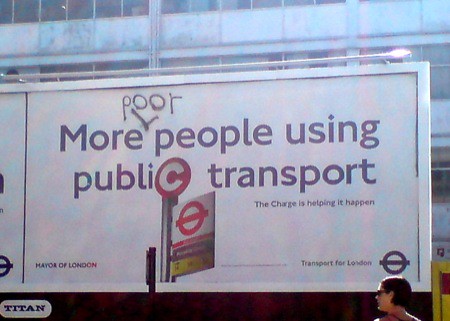 Saw this on my way to work. 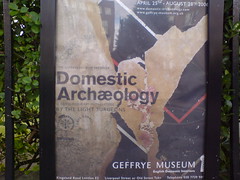 Domestic Archaeology at the Geffrye – I pass by this odd little museum every day on the way to work, or at least I have for the past few months since I’ve been in my new flat. I rarely look at it. And have never been in.

But now I’m going to. I saw this poster today and it looks like they’ve got the Light Surgeons (trendy AV artist types) doing an installation about Domestic Archaeology. It’s got a website up at domestic-archaeology.com

I love their description of what the museum is about:

The Geffrye Museum specialises in the domestic interiors and gardens of urban middle-classes. Its displays span from 1600 to 2000, forming a sequence of period rooms, which capture the quintessential nature of English interior style.

I should have visited months ago!

It’s taken me a while to put together this post. It’s been sitting in my drafts folder since early last week, and in the meantime lots of you have probably seen wefeelfine.org.

I’ll try to summarise why I think it’s such an important site. The most important reason is that it’s a site that’s built of user generated content. But without anyone generating content for the site. What the site does is to go and ‘scrape’ lots of other websites and pull out sentences where people have said “I feel…” or “I am feeling…”. It then categorises and processes the sentences (and associated images) so that they can be displayed and interrogated in new and interesting ways.

For example, if on a MySpace page I’d said “I feel like I’m coming down with flu”, it would pull this sentence into the database. Then it would look at my profile and say, OK, a 33 year old male from London says he feels like he’s coming down with flu. It would also look at the date and location on my post and use this to figure out the weather. So it would then be able to add the fact it’s raining to the context of my words.

It’s so clever. It’s recycled, repackaged and re-ordered loads of human content from around the web. And by doing so it’s created something much more interactive and compelling than the original words themselves. But the real feat, is that for all it’s cleverness, the site itself feels simple and easy to use. And it looks beautiful too.

We Feel Fine / by Jonathan Harris and Sepandar Kamvar

There’s also another application of similar technology at: Love-lines.com. Created by the same team this looks of expressions of love and hate online.

I’m faced with a daily paradox at the moment: the busier I get (sometimes doing quite interesting stuff) the less time I find that I have to blog about it. I need to get better at putting aside a few minutes a day to keep the site up to date. Or maybe I need to consider a slightly new format for the blog where I can say more in less words? Here’s a few things I’ve done in the last 2 weeks of quiet blog time:

Anyone got any tips on how to stay blogging during times of stress and heavy workload? 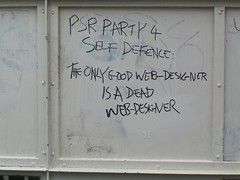 Spotted this on the wall of Weiden & Kennedy’s London office. Not sure I agree 100%…

Funnily enough a second post about an AKQA piece of work in one day, they must be doing something right. And in this case they really are: Run London – RouteFinder. An extension of the undoubtedly great brand property Run London, this time a trendy mash-up with Google maps.

But this isn’t just a fashionable me-too, this is a really really smart utilisation of Google’s mapping API. It allows users to overlay and share their running routes. You can search for routes by postcode, type of terrain, whether it’s well lit at night and more. 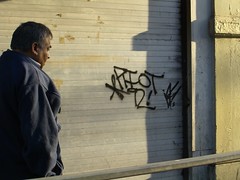 Had some fun with my new camera on Sunday. Found that if you set it to a really high shutter speed you can take some almost decent snaps out of a moving car window. Visit this photo set to see what my cab ride from London Bridge to Tulse Hill looked like.

David Sifry (the founder of Technorati) gives his view on the state (and size) of the blogosphere. Some interesting numbers in there. Perhaps naively I had no idea of the scale of fake blogs as used by spammers.

It’s true that you learn a new thing every day. Tangentially, The thing I learned yesterday is that a key part of ‘The Knowledge’ that London cab drivers have to go through is a test of temperament. If you’re a moody git, you fail. I reckon some of them need retesting ;-)