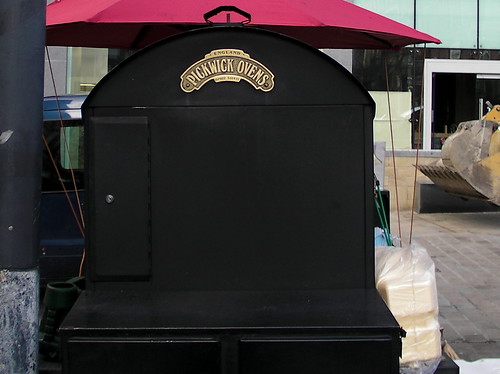 Pickwick Ovens are the best thing in the world ever.

I was thoroughly delighted to see one in action in Leeds city centre. The most genius thing about them is the fact that you can smell them from about 1/2 mile away. You know you’re in the vicinity of hot potatoey action before you even set eyes on the thing.

Scamp has written a really good piece about ideas and their appropriation by advertising. It specifically talks about the Cadbury’s Gorilla and the fact that it was originally pitched to someone else, and there was once a drumming Gorilla on YouTube.

As I was reading it, I found myself going: “Oooooooh, how could they be so bold”. And my scandal alarm started beeping.

Then I read the comments and this jumped out at me:

You brits are funny. you take the business of advertising so seriously.

So I decided that ‘Yank’ was right, I shouldn’t give a toss really.

It’s a bloody advert that looks and feels like a really great YouTube clip that turns out to be something that’s a bit like something that was an ad for something else that someone found on YouTube.

Then I started thinking about the poor bloke who made the original ad. I bet he’s sitting down the pub delivering a monologue to a deaf pint about how he could have been a contender. But at least his reel has got something on it that he can claim as the inspiration for something that’s loads better than the thing he made, and he can say – “see my idea was brilliant, I just didn’t have the right budget, the right client, yada yada yada”. Thankfully no-one changed it into a drumming Walrus or something, then his claim to fame would have been almost impossible to make.

So I stopped feeling sorry for the original gorilla creator. Christ, he’ll probably get interviewed on some advertising blog about it one day. And who could ask for more than that!

Then I started feeling sorry for the original guy in the gorilla suit. He’s the unsung hero of the whole thing. For him it was just a case of the wrong gorilla guy being in the wrong place at the wrong time.

Anyway I’m trying not to care about it. There’s a global ideas-squeeze on, and I’ve not got time to be worrying about such things. There’s an internet full of things to be looked at and re-processed and re-appropriated.

As part of his piece Scamp has some sage advice about dealing with the ideas recession, it’s the creative equivalent of keeping tins of food in a bunker in the back garden if you ask me:

Have an efficient filing system for your rejected work, because a lot of briefs come up time and time again (this product is simple to use, this product is inexpensive, or in the case of Cadbury’s – this product will make you happy).

And have an efficient storage area for funny photos, YouTube clips, news articles – things that one day you may be able to make into an ad. Because as someone once said, “the worst time to be looking for an idea is when you actually need one.”

However, I’d just like to add that you have to be careful that you don’t cling onto your rejected ideas too much or you’ll end up being a brain crack addict. Honestly you will.

I’ve no idea where this came from, but as I was trying to get to sleep last night I came up with this rather odd, and strangely extended, metaphor. Businesses as cat ownership (I’ve a suspicion it might work for kids or dogs too, but I’ve never ‘owned’ either of those)…

When they’re a kitten life is a lot of fun. They’re cute. They chase balls of string. Plenty of exploring and making mistakes. You could sit and watch them all day. Occasionally they’ll pee on the carpet, but the volume of wee is relatively small, and oddly it doesn’t smell all that bad.

Then they get house-trained. They learn to use the litter box. Then they start wandering outside. They’re a bit more of a worry than they were before. They could get run over. A fox could rip out their guts. But they’re still really cute, and growing.

Then they start doing bad stuff. Getting into yucky habits. Humping both beasts and inanimate objects. Fighting. Staying out all night. Hanging out with whichever of the neighbours will give them food. At least they’re still doing interesting stuff, but whenever you hear late night cat-wailing you can’t help but worry…

Then they get tired and lazy and just want to sit around the house in the sunny spot getting fed. Their hair goes a bit matted and off-colour. Perhaps their bladder weakens and you have to follow them around all the time cleaning up. Feeding, cleaning up, feeding, cleaning up. You still love the silly old thing, but it’s not as much fun as it used to be.

I think maybe it’s time for some kind of therapy ;-)

Is this a new food show format? Or perhaps M&S could quit the food-porn ads and do this instead ;-)

And while we’re on the topic of music and food, in case you’ve not seen it:

Channel4Radio.com is a new Channel 4 venture offering a range of podcasts. Some of them look pretty good. They’ve got a series of 30 daily downloads from the Edinburgh festival, which is nice. Plus Richard and Judy’s Audiobook Club!

But probably the smartest bit of integration they’ve done with the TV channel is the Big Brother contestant podcasts. They’ve got each of the remaining housemates to record a 15 minute radio show which you can download from the site. Then you can vote on whether to starve them of food for being rubbish or not.

Seems like a smart way to get a devoted TV audience to subscribe to podcasted content. I’d speculate that this will be the first podcast that most BB viewers will have downloaded.

Interestingly they seem to be using shopping basket software and content is all marked as FREE right now. But it looks like it would be very easy for them to start swapping in Â£s where the FREEs are…