The ad industry has been broken up and broken down so that direct response, in-store, brand identity and all those things are mostly handled by different people. ‘Digital advertising’ has historically been treated in the same way – it’s something that another bunch of people do.

We can see this changing all around us, as a new sort of re-integration is happening, a lot of it seemingly driven by the upsurge in digital focus and spending.

In this way the people and processes that produce big smart communications ideas can take over and squirt out great integrated / digital campaigns – just look at Crispin Porter – the no 1. ‘Digital Agency’ at Cannes last year. But of course, Cannes is all about advertising.

Personally I’m all too happy for Ad Agencies to get stuck in doing more advertising using more different kinds of channels. I’m just not convinced that the skills for producing great advertising are the same as the skills needed to do the kind of digital stuff that gets me excited.

So what am I talking about?

I think it’s my inner-inventor that loves the digital space. It’s not just about creating content, it’s about designing and building the platform that the content exists on too. As a crude example the opportunities afforded to us are like being able to invent how a TV works at the same time as shooting a film. Only the devices that are connected to the web are infinitely more powerful and more adaptable than a TV. Personally I think this mindset is quite different from a traditional communications mindset. Something we see all the time when we’re interviewing people.

And I’m not saying that advertising agencies haven’t done brilliant non-advertising things too, because of course they have, lots of them.

I started writing this list of 10 things after I chaired a debate at the D&AD about ‘Consumers In Control’ which basically turned into a mass venting of frustrations from people working in both digital and traditional advertising. It’s obvious that there’s lots of conflicting opinions and lots of repressed anger.

Originally I’d written this as one big long monster post. But I think it works better as a series – it means that people can comment on each point individually and I can be attacked point-by-point rather than in one big monster onslaught. I do welcome any comments positive or negative, but this isn’t supposed to be deliberately inflammatory, honest.

A couple of caveats, hopefully to pre-empt any real hatred that this might inspire:

Firstly. I’m going to have to put forward my definition of ‘digital’. As it stands digital is a bit of a duff word to describe what we do, as Richard says when he talks about ‘not getting digital’:

He’s absolutely right. Almost everything is digital which is why it’s so difficult to get this point across.

So let me clarify. The digital world I love is all about:

Secondly, it’s worth stating this is all opinion. My opinion. Born out of my experiences. Really I should have called this “10 reasons why I’m happier working in a digital agency than an advertising agency, and who gives a shit what I think anyway”. But that’s hardly snappy is it?

Poke are hiring. We’re looking for a new creative director.

It’s a nice place to work, or at least I think so.

We’re looking for someone quite particular. If you’re interested, or think you know someone who might be, please take a look at the job description here.

I had a great response to the last plea for help and I’m keeping my fingers crossed that the web and the lovely people who sometimes read this blog might be able to help.

If you’re responsible for a successful lead, or are a successful applicant through my blog I’m sure I can furnish you with some kind of decent reward. I’m not sure what yet but we’ll work something out…

END_OF_DOCUMENT_TOKEN_TO_BE_REPLACED

It’s been a few days. But I am on holiday.

For some reason whenever I go away people say “you’re always on holiday”, but I promise I’m not. Regardless here’s where I am: Algund-Lagundo – it’s a lovely place, but slightly odd; it’s in Italy, but everyone speaks German. I’ll bore you with some holiday thoughts and pics later.

Anyway this time I decided to take my laptop with me, just for emergencies you understand. But when we arrived I was told that lighting had hit the internet (my poor translation from the German, but not a million miles off). When I called work on Monday and told them I couldn’t get online I really did feel my excuse was about as far fetched as the dog having eaten my homework.

My biggest regret about not being able to get online was that Mike Coulter who writes the excellent Digital Agency blog was going to blogsit for me. But I didn’t get round to sorting it before I left :-( When Mike and I were emailing about it I thought the idea of blogsitting was pretty interesting, then I discovered that it was old hat: http://www.blogsitter.net/ 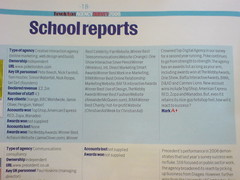 This is the second time in 2 years that we’ve won this award which is either great news (or proves that their scoring is fundamentally fucked). They basically ask clients what they think of agencies and ask them to score them on lots of different criteria. It’s nice to be recognised by clients rather than peers or ‘judges’. So I’m pretty happy today.

In our ‘School Report’ they’ve misspelled my name in rather an amusing fashion. No longer will I be known as Iain Tait, I’ll now be known as Ian Tart.

It’s not mentioned on the: Revolution Web Site