I’ve been a bit of a sceptic about interactivity and FMCGs. Most of the time they just create digital litter.

Maybe it’s just because I’m a big fan of crisps. But Walkers seem to be doing some peculiarly interesting things around conversations and their brands.

Firstly the brilliant ‘Do Us a Flavour’ campaign. (If you’ve not seen it, they’re getting people to submit new flavors of potato chips. If you submit the winning flavour you get £50k and a 1% share of the profits from the new flavour).

The site’s got a lot of shortcomings. It doesn’t handle duplicates at all well, and the searching isn’t up to scratch. But it obviously doesn’t matter that much to people: 130,000 pages of entries – 6 to a page – gives almost 800,000 flavours submitted. That’s bloody incredible.

But they deserve it. They’ve built the campaign around a great question. A superb conversation starter. I’ve ended up two or three times now in conversations where people have got really excited about coming up with interesting new and bizarre flavours of crisps. And debating what would actually sell. What’s likely to win. Etc. etc. etc.

It’s a brilliant user generated content idea becuase anyone can do it. You don’t have to have any technical skills whatsoever. It’s just about imagining something. And something that almost all of us will have an opinion on whether we’ve thought about it before or not.

Once the submissions round is over. They’re going to manufacture the judges favourite top 6 flavours and let the public choose which of them wins. Generating trial / sales and driving even more conversations. As a genuinely integrated campaign I think it’s quite brilliant.

And now they’ve re-launched Monster Munch crisps. But they’ve not made a new version. Instead they’ve reverted to the old one.

What’s so clever about this is that they’ve tapped into a conversation that’s been going on for decades amongst crisp fanciers. Everyone knows that the old Monster Munch were bigger. They were ‘the biggest snack pennies can buy’. And they had really cool big monsters advertising them. It’s the kind of thing that pops up in those terrible ’50 reasons why things aren’t as good as they used to be’ nostalgiawank TV shows.

Anyway they’ve made them like they used to be again. And I love the ‘old’ flash on the top corner of the pack.

And if you’re wondering how big they are now. This is how big…

Apparently there’s a new website coming soon too. I’m not holding out a lot of hope for it being the next brilliant thing online. If they follow the normal FMCG template it’ll be all about the monsters. Maybe some flims? Perhaps embeddable / sendable monsters? Monster games? I hope they do something really nice though. Building on what they’ve done so far. 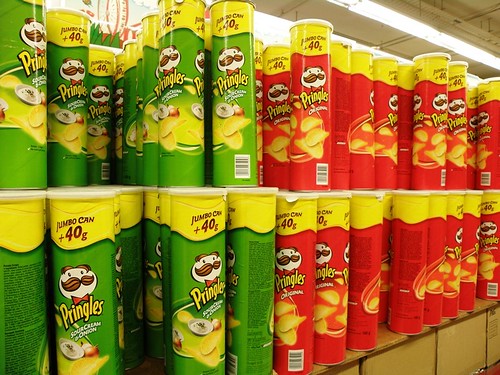 They may crunch like a crisp and taste like a crisp, but Pringles are now officially closer to a cake than a potato snack. Judges have ruled that Pringles could soon be VAT free after P&G managed to convince law-lords that their addictive crack-snacks are actually cakes.

The law is an ass.

From the Telegraph, via Chris Reed via the Twittersphere.