I seem to be witnessing more and more intellectual pissing competitions these days. And it’s not just in planner-land, although that’s where I’ve witnessed some of the ‘best’ ones. I’ve seen a few good technical ones, and even designers seem to be getting in on the act.

So how do you spot when the transition between conversation/discussion and pissing match occurs? Typically the conversation will start to move from being a group thing to being dominated by 2/3 members of the group. These people will become the players.

One the players have been established they take it in turns to metaphorically piss higher up the wall than each other. Most of the games I’ve witnessed have been about rather esoteric matters. I guess there’s no fun in facts.

Or maybe I’m imagining it all.

Image from Geoff (not sure what the etiquette is about using images from Picassa pubic galleries – hope he doesn’t mind).

I’ve veered into silliness with trainers a few times, going out of my way to find them, spending too much money on them and hoarding them badly. I’ve always known that I wasn’t a real sneakerhead though. And I had that confirmed to me when I checked this article oncleaning your kicks @ Sneaker Freaker. If you’ve got dirty old shoes that you’d like to bring back to life there’s some good tips in there.

But what really made me realise what an amateur I am in the sneaker world was the Jason Markk site. Jason apparently makes the ultimate sneaker cleaning fluid – well someone has to. And I like the fact that it’s being done by someone that’s so single minded.

From their about us page:

We make premium goods and accessories for the sneaker boutique market. Our goal is to fulfill the needs and wants of today’s sneaker consumer by offering innovative, high-quality products and accessories. Our mission is to become the most widely recognized and trusted sneaker product and accessory brand in the world.

I’d hazard a guess that anyone who loves their sneakers will love someone who has made it their mission to create the ultimate sneaker products. Would you rather buy a product from someone who really seems to get how important your shoes are? Or Unilever?

Obviously post-sale the product has to be totally excellent too. The product is being put on shoes that are worth way more than money to their owners – just one story of a pair of 1 of 20 AF1s heading south could ruin the reputation of the brand in such a small niche market.

At first I scoffed about their limited edition cleaning sets. They look great and they’re definitely embedded in trainer culture. But then I thought about the kind of people they’re aiming at – and perhaps more importantly where the product is going to get sold. It’s not going to be in a local hardware store is it? If you’re paying $20 for a plain bottle, or much more for a fancy limited edition set you’re only going to see it in boutiques and high-end trainer stores. Where the packaging and legend around the product become super important.

I was reading a piece in the New York Times about goings-on at Gawker when I came across this quote from Choire Sicha (the outgoing managing editor as far as I can tell):

I’m not really that bothered about the rumour-mill at Gawker.

However, I do care about is the Charticle!!!

I’d never come across the term ‘charticle’ before. And I can’t be the only one as it’s not even included in Wikipedia (yet). I thought that might mean that it didn’t actually exist?!?

But with some digging around it appears that the charticle is real. This discussion featuring lots of people who work in newspapers seem to generally be cool with charticles. It basically seems to be like a hybrid between an article and an infographic.

Here’s one that Google Images threw up:

And here’s a much simpler one from oregonrepublic’s photostream on Flickr:

There’s really not that much info on charticles online – a few people claim it’s a Tufte thing, but I reckon if it was one of his there’d be much more mention of it on the internet. Plus I’ve had a flick through my Tufte books and can’t find anything.

I did find another use of it on Technorati, ironically it was in an article written at Gawker by the aforementioned Choire Sicha…

Forbes.com is pleased to announce their most transparent and value-free bit of traffic-grabbing web content to date—a list of America’s Most Lustful Cities! It’s like—what is it even like? It’s like intellectual impoverishment in charticle form. I’m almost proud of them!

I wonder how simple a charticle can get before it becomes simply an article? I guess my question is: “is a list a charticle”? Choire seems to think so.

Any charticle experts out there? What do you think?

All this Pecha Kucha stuff is starting to get a bit dreary.

The idea of PowerPoint Karaoke seems a lot more random and challenging.

Basic idea is: people stick real presentations ‘in a hat’, then presenters get allocated a random presentation and have to present it as best they can.

There’s a great description of how to do PowerPoint Karaoke at Heathervescent.

There doesn’t seem to be many of them on popular video sharing sites (yet). There’s a few in German, but here’s one in English from BarCamp LA. You’ll get the idea:

Oh and if you want to ‘do PowerPoint Karaoke’ there’s a nifty presentation randomiser that works with Slideshare, you just enter a tag and it pulls in random presentations for maximum randomness…

I popped in to see the chaps at Love in Manchester today. I don’t normally just turn up in strange towns and nip round to see people, but I got nice email from them yesterday as I was on the train (completely out of the blue), so it felt like fate was trying to tell me something.

So I went and met them. And what a lovely bunch of guys they are. With a fab office space. I even bumped into Matt who’s a sometime Poke freelancer which was a nice surprise too.

They gave me a book when I left. I’ve been looking at it. And I’m quite jealous. They’ve got a really amazing body of work behind them and when you look at what they’ve got going on it’s really impressive. Check their blog at: http://blog.lovecreative.com/

I really like the tone of voice they use in the book. Here’s one of my favourite bits (hope they don’t mind me using it):

I’m not adverse to a bit of swearing. But I always think there’s a bit of a risk using it in commercial things. But I’m OK with the use of ‘What a bastard’ at the end there. But oddly only if it’s spoken with a northern accent.

If you pronounce it b’ah-st’ah-d it just sounds odd. But b’ass-tard sounds just perfect to my ears. (Sorry my phonetic notation is crap, but hopefully you get me).

Perhaps its something that I’m particularly sensitive to being as I seem to see-saw on the way I pronounce bath, path and grass. One minute I’m all b’ah-th, p’ah-th and gr’ah-ss the next I go proper North. The curse of growing up in the midlands I guess.

Thank goodness I had my camera with me… 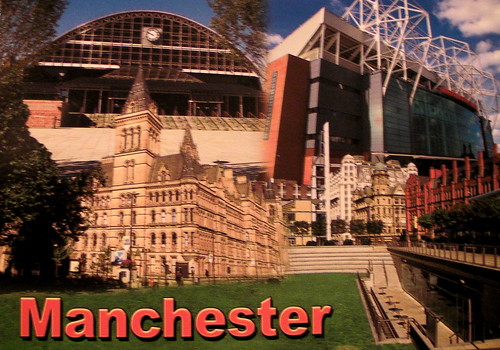 I’m in Manchester doing some work.

It’s good for me to get back to ‘the north’ from time to time. Last time I was actually in Manchester everyone had really baggy jeans (like 28-inch bottoms), Madchester t-shirts and curtain haircuts. I was glad, and not surprised, that times have changed.

I’m always amazed at how many people haven’t really ever been to ‘the north’ – there’s a few in the group that I’m with. Sorry to northerners for the use of inverted commas around ‘the north’, but that what it sounds like when the virgins say it.

Forget jumpstyle. This is the hot new dance step (well it was hot and new in 1930)…

Check the user ‘GoodOldDays‘ for loads of great vintage videos. There’s some amazing stuff in there.

Very funny Flickr set by Paulthewineguy. Number 43 had me ROFLMAO.