So with a heavy heart yesterday I offered up my old Poke shoes. Now it's time to talk about my new W+K shoes. I'm not sure what they're going to look like yet, but apparently I get access to some massive Nike cave of infinite free awesome magic trainers – or at least that's what I was promised ;-)
As I said, getting me to leave Poke was not an easy thing. But in the end an intoxicating mix of an independent agency, chock full of amazing people, in a fantastic place, brimming with opportunity and creative energy, and a dose of good old-fashioned persistence twisted my arm.
There has been some stuff around on the internet about my move to W+K, but I wanted to try and put it in my own words, and because I like lists here's 10 reasons why I'm super-excited about going to work at W+K – some of these things are moments of brilliance, others are signifiers that the culture of the agency is digitally-minded and others are neither. But all in all they point to an interesting road ahead.
1. They have a 2-letter domain name!

Yes, a .com domain name with just two letters in it! That's pretty damn rare and exciting for a geek like me – here's some details – sure I could have taken a job at BK or BT or AA, but none of those are half as cool. And if everything goes tits-up the agency can always become a URL shortening service.
2. They make ads with men and horses in them
I don't even like horses much, and I'm not a huge man-fan either (not in that way). But W+K do make great ads. Funny ads, rousing ads, thought-provoking ads, stylish ads, they make totally outstanding ads. They make ads that people love and talk about – most significantly they make ads that have cultural resonance. Dialling up the digital component of things that are already cult can only make them bigger, stronger and longer – I've just realised how dodgy that sounds in relation to men and horses, but I'm going to go with it for now.
3. They made one of my favourite online campaigns ever

I've always been a massive fan-boy about this CK One campaign. It's from back in 1999 and many people will have forgotten the print ads with the models email addresses in them. Many people will also not know the story behind the email addresses. This Wired article might fill in the gaps – basically W+K created a deep and persistent online drama that lasted for over 2 years for CK, definitely one of the most impressive early digital campaigns globally – and still holds up today as being great – and way ahead of its time.
4. Amazing digital talent

I've met various people from around the W+K network over the last few years – and without exception I've been frightened by them all, in a good way. Oddly in my head I'd never really added them all up. But once you do, you realise that W+K has an incredible digital team – it's just spread around the world in an interesting way. And then I realised if that's the level of talent that they've got in the small pool I've been exposed to, what else am I about to find… :-)
5. They've made friends with failure 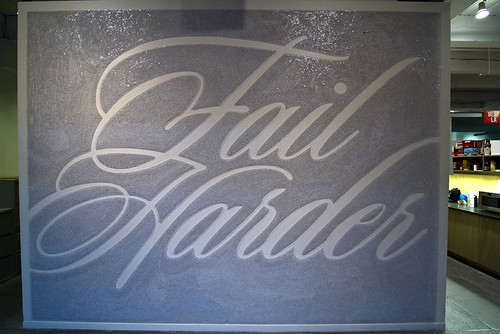 Lots of companies talk about embracing failure. But few actually have a management team that will let it happen beyond a powerpoint chart or two. I'm not planning on being a colossal failure. But it's good to know that taking wrong turns is tolerated – for the right reasons and if the right lessons are learned I'm sure.
6. A love of the unknown

"Walk in stupid" is a phrase I've seen around W+K from time to time. I reckon it's a particularly healthy attitude to have when it comes to approaching the digital world. I've seen a few agencies starting to behave as if they totally 'get it', like they've got this whole digital thing licked. Every second they spend congratulating themselves they've just become a tiny bit less relevant. There are millions of people whose entire livelihoods are built on making you look more stupid than you did yesterday (not in a nasty way) – so be prepared to always be a bit stupid.
7. A connected mission statement

If W+K has a public facing mission statement it's this: "We exist to create strong and provocative relationships between good companies and their customers". Pretty much the most awesome challenge for someone who gets obscenely excited about the power of networks and how connections and relationships work.
8. Making incubation a core part of what they do 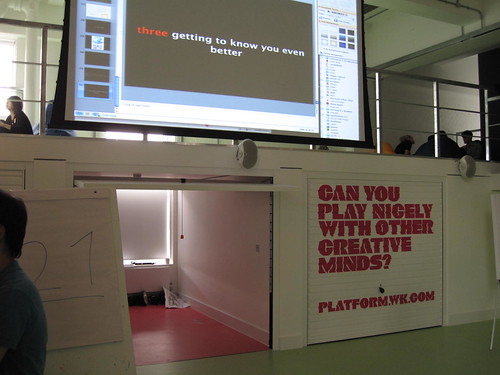 W+K have 3 incubator style projects (excluding 12) – Platform in London, PIE in Portland and W+K Lab in Tokyo. Each of them is quite different in its structure and focus, but each of them allows the agency to reach out into a section of culture and creativity that exists on the fringe of what the agency does. I don't think anyone would claim that any of these things is a perfect version of the model. But to me they signify an important recognition that creative companies have to experiment with partnerships, collaborations and ways of working to stay relevant. I've always had a strange vision of creative companies getting to a point where they're incubating all of their staff – are we on the way?
9. Just do it

Just do it – surely 3 of the most famous words in advertising. But it doesn't just feel like a line that came out of an agency it feels like a line that is lived by an agency. A line that captures a spirit of creative energy, independence and entrepreneurialism.
Perversely the words were made all the sweeter for me when I heard the story about how they had been inspired by the words of a man on death row about to face his end, his final words: "let's do it".
That's not to say I feel like a dude on death row, far from it.
10. Doing the best work of your life

Another Wiedenism that permeates the organisation is that it's a company where people go to do the best work of their lives. My inner British cynic is a loud voice in my head, and I assumed it was just a handy saying that looks good in PR and HR settings. Another nicely written ad line. But after a bit of chatting to people and seeing how things actually are rather than how they're expressed it becomes clear that this is genuinely how the company is set up. It's a company that does its best to bring out the best in people.
I hope that by joining W+K I'll be able to carry on being involved with making interesting stuff, but at the same time can, in some small way, help other people to do the best work of their lives. With awesome digital stuff at its core.
And that's my 10,