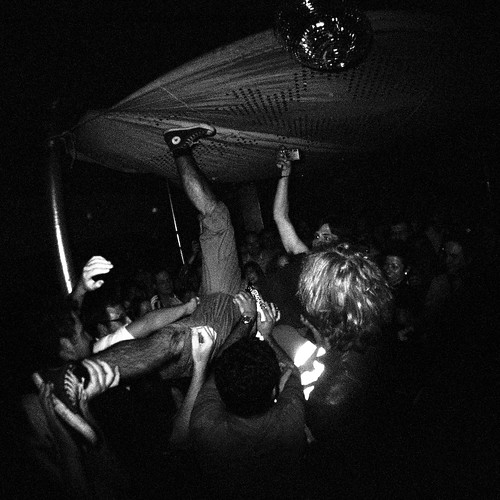 Some people might know about ClubPub, a lot of you won’t. Basically it was a very irregular night that the Poke people have been organising over the last 5 years. It all started out with us just renting out a pub on Wednesday nights and turning them into a sort of club. Lashings of smoke and lazers can turn any pub into a banging nitespot ;-)

Anyway after 5 years we decided to call it a day. The last couple of nights felt a bit tired and lacking in direction so we thought we should have a massive blowout to kill it off rather than letting it die a long drawn out fight for life. That’s what we did on Wednesday.

Crank (the Poke band) made their stunning debut (causing massive crowd chaos as seen above). The legendary AcidMalc (a clubpup favourite) played a storming set. And Dickon and Vasco both took the decks for a spin.

I had the honour of playing the last set. Which was really fun. Apart from the venue decided to close almost an hour earlier than we’d agreed (apparently they weren’t taking enough money at the end of the night – I think people had drunk enough quite frankly).

Here’s an extended version of the set I played (this is what it would have been if I hadn’t been cut short).

Obviously sounds better after many pints of lager ;-)

10 thoughts on “The Last Ever Clubpub Mix”