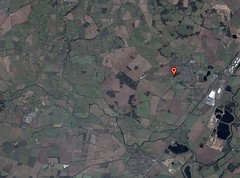 I had a thoroughly enjoyable afternoon coffee with Russell Davies on Friday. We talked about lots of really interesting things.

Strangely the thing that I came away with most was a weird kind of nostalgia for the village where I grew up.

I’ve only met a couple of people in my adult life who actually know where I grew up. I normally have to say, do you know Birmingham? Do you know Nottingham? (Most people sort of say yes to both, but you can tell they don’t really know where either of them are – and why should they). Anyway, I grew up in a tiny village called Barton-under-Needwood, and it’s not really very close to anything.

But, not only did Russell know the exact village where I grew up, he’d been to one of the pubs there. And being an fellow East Midlander was familiiar with being called ‘duck’ and all those other strange things I’d not considered for ages. I’ve not been back there for nearly 15 years.

So yesterday I thought I’d go back there. Not in reality, but via the teleportational qualities of Google Maps. So I put in the name of the village. And got a nice map. Then I refined it down to the last postcode I could remember living at.

On the satelite view I could see my house at the end of the row of terraced houses. And I could see the cow field where me and my brother used to play. Then I started playing around, zooming out, looking at street names. And I started to remember other things, like the route of my morning paper round.

Then I remembered something I’d seen on Flickr a while ago: Memorymaps.

Memorymaps are an interesting mash-up between Google Maps and Flickr. People screengrab a meaningful map on Google, then they annotate them with memories, so when you move your mouse over the map you can see points of personal interest. OK, so it’s quite self indulgent. But at the same time I quite liked it as an idea: so I made my own.

One thought on “Google Nostalgia Maps”